Pocket Morty is a game that has taken over the world and how! This game is inspired by a TV show in the name of Rick & Morty – Rick being the alcoholic mad scientist and Morty is his grandson. This show involves the various situations they go through during their daily lives and how they tackle it. Trust me when I say this – these situations are not normal at all. With aliens and creepy crawlies at all times – this TV show has seriously been one of my favorites since the time I started watching it. And now, the game too has got me hooked.

This game is a ‘Morty Training’ game with a few role-playing parts thrown here and there. It involves collecting Morty’s along your path and then training them accordingly. There are a total of 70 of them, which when collected, the winner would be declared as the ‘Best Morty trainer of all time’.

But now that we have the basic premise of the game out of the way, it is possible that you might face some threats along the way which may be difficult to cross. In such a case, a cheat code is the best thing that you could opt for. One of the most important mechanics of the game involves Crafting. It involves combining two to three different items which will help you along the way. However, deciding the perfect combination of these items is also of utmost importance. These items that you craft will allow your Mortys to survive for a longer period and continue being an important part of your team.

1)    Just like Pokemon, try to catch as many of them as possible. This will help you to get through especially during the early periods of the game. It may be extremely difficult to get through the game, especially during the initial stages. Hence, it would be better if you fight all of the Morty trainers in the early stages and then lose to Ricky at the end. Sticking to this tactic will help you to acquire enough experience and thus, move ahead in the game.

3)    Sometimes it is better to avoid the gaze of other Morty trainers to avoid any sorts of battles. It’s in your best interest to take on the challenge when you are in the process of using your level in the game.

4)    Get real familiar with the item crafting recipes at all times. Every time you hop onto a new dimension, be sure to explore it fully. You are also going to keep your Morty’s alive during this process. Hence, be sure to collect all the necessary collectibles and understand their recipes to ensure that your Morty’s last longer.

Now that we have understood a few basics of the game, let us look at some of the cheat codes you could opt for to collect these items and to use them effectively during the game. Finding the items is also an altogether different story and you need to be sure to collect all the items, whether as rewards or with the help of badges at Salesman Rick’s store. 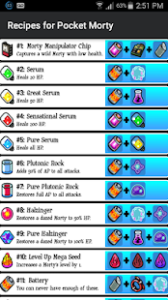 This was our collection of some of the Pocket Morty Tips and Pocket Morty Recipes, Tricks and Guide. If you are aware of any such other tricks, let us know in the comments below. We would love to hear from you!